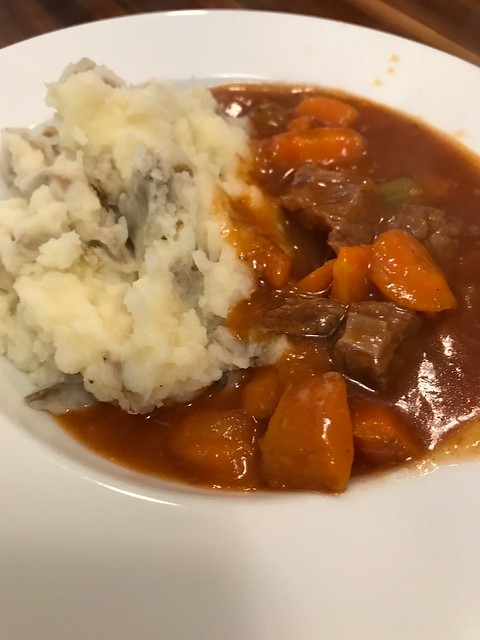 Time to table: Her estimates are always insanely off. I think it took probably 20 minutes to prep (depends on how fast you chop), and over an hour total in the instant pot including coming to pressure and cooking, and resting. I didn’t do the oven step because the oven was occupied.

Servings: Would be 2 dinners for our family

Modifications: I added more veggies than it called for by a bit, used a can of tomato sauce (instead of juice) and maybe a can of broth. The recipe as written sounds dicey with the low amount of liquid but I shouldn’t have messed with it quite so much because ours got pretty soupy. I did thicken it with the cornstarch slurry and simmered a bit at the end and the consistency was pretty good. I also added some garlic powder and pepper and I think it could benefit from some additional spices during cooking too.

Erin: Like (but I liked this one better – the beef was kind of tough, and I prefer it to get really tender)

Kids: Surprisingly pretty okay with it.

Notes: This was decent, but my main issue was the tenderness of the beef. I think maybe giving it like 10 more minutes at high pressure would have helped. Definitely liked it with potatoes, and without would not feel like a complete meal to me.

Also, we keep just not posting the recipes we make, and then I forget if we’ve made them… trying to be better about it!