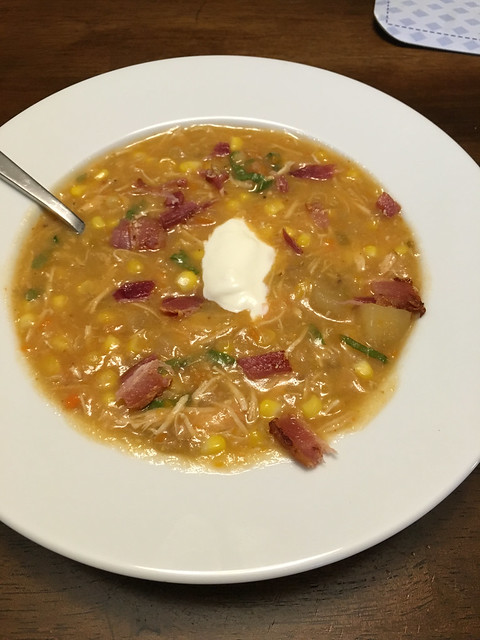 Modifications: Added some celery, and a few more carrots than called for

Servings: Many – will feed our family of 4 for 2 nights and probably get a few lunches out of it too

Time to table: I’m slow, but it took me probably 40 minutes to prep this (then the hours of crockpot time)

Annie: Like (but not enough to want it in her lunch)

Notes: I typically think of crockpot meals as quick. This was not quick. I had a baby strapped to me, and thought I’d just have to chop some veggies and throw it in the crockpot, but no. I also was very confused by the step of making bacon, and then having the bacon never mentioned again. You could put it in the crockpot but it’d probably get mushy – I saved it and chopped it up and added to my soup (and Annie and Luke just ate the pieces by themselves). Then the added step of sautéing onions and garlic and making a roux, etc. For sure not something to quickly “throw together” before work, but if you plan ahead and actually know what’s coming (and chop veggies the night before) it would be doable. The soup was really good, and I do think it’s worth the effort for the amount of food it makes especially. Very slightly spicy but not overpowering.