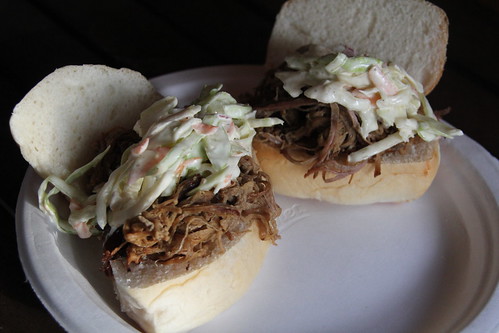 Modifications:  Didn’t have dijon mustard, so I used some stone ground stuff we had. Missed the broiling step, which would have added a nice crust to it, I’ll do that next time. I had to cut the brisket in half to fit in the dutch oven, I want to get this roasting pan so I don’t need to cut it next time.

Time to table: 30 minutes to prep the brisket with the sauce the day before, then six hours in the oven the day of cooking. Coleslaw took 45 minutes or so.

Servings: Tons. We had our friends and their three kids over for dinner and we’re going to have at least three dinners worth of left overs.

Notes: I love making big cuts of meat, so fun. Braising the meat is incredibly easy, compared to using the smoker. We were at Erin’s parents’ house the whole time it was cooking, just got home and shredded it. Making coleslaw was kind of fun too, got to use an attachment for the food processor that we hadn’t even opened in five years. Cheaper than buying it at the store and you get a ton of it.